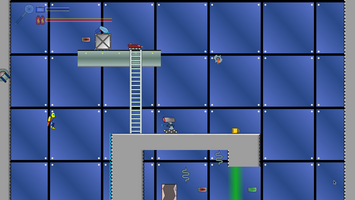 Flyboy was originally written in C for 16-bit real-mode DOS with VGA graphics back in 1996. That game was lost to hard drive failure and later attempts to recreate it for Windows using C++ and SDL were always interrupted by real life. Now I've prototyped it in Python using Pygame, Inkscape, and the Ninja IDE..

This first release is a nearly complete game designed, drawn, and programed by one person(myself). All features have been implimented and hopefully all the major bugs have been fixed. I plan to design many more levels and fix their order to follow a progressive difficulty.

The current Windows installer requires Windows 10. I hope to release a version that supports back to Windows 7 or Windows XP. Help in this regard would be greatly appreciated. All you need is an old version of Windows, Python 2.7.x, PyInstaller, and a few minutes to spare.

I have not built Linux binaries because there are so many different systems out there. Perhaps I will in the near future, but since most distributions include Python 2.x and pygame, I see little point. All you need to do is unzip the archive into a folder with write access, make sure that the script has execute permisions, and double click it.

One note for Linux users. A bug involving Pulse Audio and newer versions of pygame exists that may cause abnormally high CPU usage while playing this game. Laptop users are encouraged to install pygame 1.9.1, which is the version included with current Ubuntu and Linux Mint distributions.

Look for an improved version of Flyboy that will use either the upcoming pygame2 or Godot engine with many new features, including space shooting sections and a top-down map screen that connects the rooms together with block-pushing puzzles.

Jump and jetpack through alien ships