Savage Realms is a board game that allows between two and four players to lead their followers in a struggle for supremacy over a mythic land where men and monsters battle in an eternal war, the survival of their race in constant jeopardy. Players choose one of the seven races, each with a set of strengths and weaknesses, and take turns gathering resources, expanding territory, building cities, strengthening defenses, and battling enemies. Balancing these activities is of great importance, as is the accumulation of spiritual power that is generated by prayer and focused into powerful magical effects that can enhance your forces or devastate your opponents. 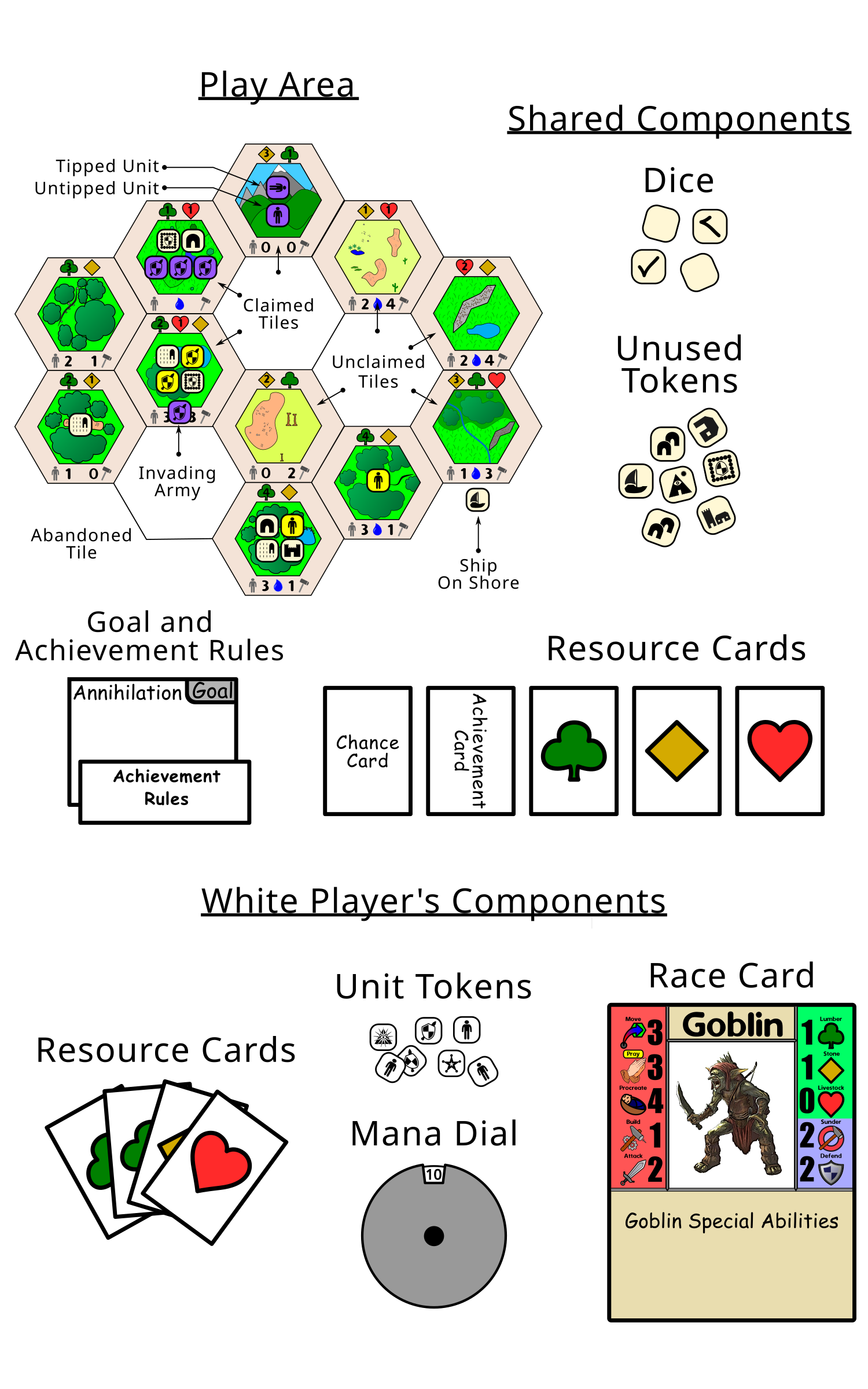 Savage Realms includes seven different races, a play area that is shuffled into a nearly infinite variety of random landscapes, a selection of goals for players to compete over, and a reward system that gives players who complete difficult tasks an advantage in their effort to reach the overall goal. These features combine to offer a gameplay experience that is rich, exciting, and unpredictable, with each game differing from the last, often in drastic ways.

Although Savage Realms offers an exceptional level of depth and variety from a fairly simple set of rules and cards, it does take a substantial effort for new players to learn and understand. This rulebook provides the necessary information in three sections. The first section is an overview that explains how to set up the game and get started for the first time. Following the overview is a list of all the game’s components and instructions for using them. The rest of the rulebook contains the Gameplay Glossary, which is an alphabetical list of the rules, mechanics, and components of Savage Realms. It defines every important term that this rulebook uses. The list may seem daunting at first, but it uses clear, simple language and is a logical method to organize the necessary information. Most of the entries are short definitions, while others explain in detail how to perform basic gameplay activities.

In addition to this rulebook, a number of cards list rules that apply while they are in play during the game. These rules need not be memorized and have no effect on the game if the card is not in play. For example, the Elf Race Card explains rules that are specific to the Elf race and have no effect if none of the players have chosen the Elf race. If players are using the Annihilation Goal Card, nothing written on the Age of Reason Goal Card applies to the game. The rules on a card that is in play override the rules in this rulebook.

Please continue by reading the overview, which begins with Getting Started and concludes with Gameplay Basics. After that, you should be able to play your first game, referring to the Gameplay Glossary as needed.