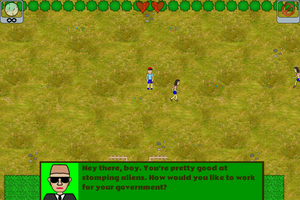 Fixed Runaway Loop
Hopefully I fixed the runaway loop that caused the game to hang on rare occasions. I've been looking for the cause for over a week and finally tracked it down to a while loop in the the friend.thought.StartFarthest() method. I have over 3 hours of playtesting since applying a fix there without anymore hangs, leaving me 90% sure that the bug is fixed.

Re-enabled mouse grab
I had to turn off mouse grab while tracking the runaway loop mentioned above. I never meant to release a beta without mouse grab turned on because it's sure to frusturate users who try to shoot an alien while the mouse is slightly outside the game window. Doing so usually hides the game window without pausing the gameplay.

I'm releasing this new beta as quickly as possible to avoid alienating too many potential players.

Error Handling in State Load
Until now the game would exit with an error code during the initial loading process if the saved game state couldn't be loaded from state.dat. This might happen if the game saves poorly(never happened yet) or if playing with a different python version(which happened during testing but probably won't for users).

Wasteland Background
For some reason the backround image for the wasteland locale was 3mb without my noticing. Not only was the file too big, but it didn't really look like burnt grass like I wanted. Now both of the grass images are only 200k and the burnt grass actually looks burnt.

Weapon Selection Improvements
I unified the weapon selection code to behave the same whether the player runs out of ammo, picks up a new weapon, or is given one. It will no longer select the flamethrower unless no other weapons are available, and it will select items such as the whistle and compass, but only in the right hand.

Shot Counter and Accuracy
The player shot count was saving twice, once in SaveStats and once in SaveState. This caused the shot count to double every time a player exited the game, which I never noticed before. Last time a beat the game I saw that my accuracy was shown as 0.7% and new something was wrong. The shot count was doubling but the hit count saved properly, so the status screen showed 3800 shots but only 200 kills.

Python 3 Bugs
I think I've found all of the problems running Alien park in python 3.x. Up until now I've been developing in python 2.7 with pygame1.9.1 because of a bug in pygame that effects many Linux users. Now that pygame2 dev builds have been released, I use python 3.5 with pygame2-dev for development and testing.